You are here: Home1 / Uncategorized2 / “Don’t shoot the messenger” 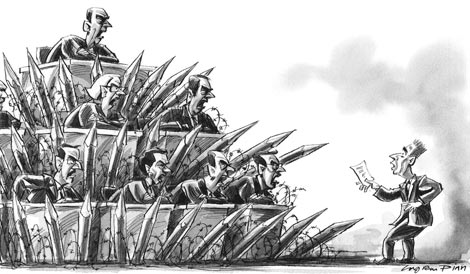 Although the expression comes from distant times when the messenger of the bad news rather then the author was often punished, it reflects a deep-rooted truth still valid even today: People do not like to hear bad news!

Not only we do not like to hear bad news, but we also have the tendency to still “punish” the messenger, who in the organizational context of today, is often in some way hold accountable for the bad news.   Nowadays such “punishments” are mostly encountered in forms of intimidation, such as bursts of ironic laughter, explosions of anger, or degrading the messenger, sometimes even firing them.

The fear of being shot for telling your message induces the fear of telling the bare truth and present the status for what it is. Therefore research and analysis based decision-making become redundant and open the door for flawed business strategies and operational plans.

You can recognize the presence of “intolerance to bad news” management culture when you hear someone:

We are by human nature selective in what we want to hear. As managers, however, we owe it to ourselves to question how we handle bad news. “Shooting the messenger” will more likely than not result in us hearing what we want to hear until we end up caught out in fault.

Want to join the discussion?
Feel free to contribute!

It’s all self-respect
Scroll to top